Determined to get heart healthy

After years of debilitating pain, Sherry gets new lease of life thanks to heart and vascular care at Abrazo Arizona Heart Hospital 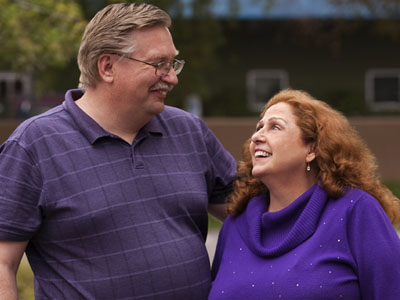 For years, Sherry Wilhelmi kept a wheelchair stashed in the trunk of her car. She wanted it to be handy, just in case. There were some days, when the pain in her chest or her labored breathing made it too tough to walk on her own.

Making such accommodations came with battling aggressive coronary artery disease. At the age of just 43, Sherry underwent her first open heart surgery. Her second one came only 10 years later.

Wanting to live a life as full as possible, she steadfastly engaged in healthy regimens. She exercised regularly and closely followed a vegetarian diet. Still, over the years, her heart ailments continued. At the age of 57, her future looked dim. Doctors told her there was nothing they could do, short of a giving her a heart transplant. “I was told to go home and get your affairs in order,’’ Sherry recalls. “They told me they could keep me alive for five years.”

Instead of giving up hope, this grim diagnosis propelled Sherry to seek a more aggressive plan to get better. At age 60, Sherry sought help from the team of cardiovascular specialists at the Abrazo Arizona Heart Hospital at a friend’s recommendation.

That’s where Sherry met Dr. Shani Saks, a cardiologist and internist, who determined that Sherry‘s first step would be to adjust her blood pressure medication.  Next, Sherry was referred to Dr. Ayman Jamal, an interventional cardiologist, to provide further evaluation. After testing, Dr. Jamal offered Sherry good news. She didn’t have to resort to a heart transplant. She wouldn’t have to have bypass surgery.  Instead, she had stents implanted in her heart.

Sherry though still was suffering from leg pain, thinking it was a pinched nerve in her back. Dr. Saks told her that people with blockage in their legs also often have cardiovascular disease so Sherry needed more testing. She performed tests to measure the pulses in her legs and evaluated her circulation.

An angiogram showed Sherry’s femoral artery in the groin was completely blocked. Dr. Saks told her that her pain was typical of a blocked artery. What Sherry was experiencing was one of the most common vascular problems - peripheral artery disease (PAD) – a condition found in some 40 million people. Sherry had been unaware that her leg pain was from cardiovascular disease.

Dr. Venkatesh Ramaiah, an endovascular and vascular surgeon at Abrazo Arizona Heart Hospital, joined Sherry’s care team to treat Sherry’s PAD, Dr. Ramaiah made a small incision in her groin, opened her artery and removed the blockage so blood could flow through her arteries.

Sherry says her treatments at Abrazo Arizona Heart Hospital gave her a new lease on life. She says she now has a steady blood supply in her left ventricle, something that hasn’t happened in 25 years. She is enjoying having more energy for her children, grandchildren and great-grandchildren. And she’s keeping her exercise plan going. “Before they fixed my heart, I could only do it for 15 minutes, walking around the Phoenix Zoo. I hope to get to a whole 60 minutes, now,’’ she says.

There’s no more of what Sherry calls “pit-bull” pain in her leg and she’s happy to see her pink toes. Embracing a healthier future, Sherry, a retired social worker, is getting more involved in life. She’s learning to play the piano and plans to go ballroom dancing. She’s planning a trip abroad with her husband.

Sherry praises her care team at Abrazo Arizona Heart Hospital. “I found someone who listened and was willing to improve my quality of life,’’ she says. “The hospital staff is very responsive They are willing to be proactive. Six months ago, I was closing out my life. I’m feeling so good that I’m having a hard time sitting still.”

Disclaimer: Dr. Ayman Jamal, Dr. Venkatesh Ramaiah and Dr. Shani Saks are independent physicians and not employees, agents or representatives of Abrazo Arizona Heart Hospital. They are solely responsible for the provision of their medical services to their patients.