May 28, 2019
Richard Sutz was experiencing shortness of breath. Something needed to be done, but at he was not a good candidate for open-heart surgery. 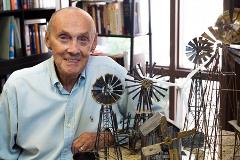 He needed a new aortic valve, due to a condition called aortic stenosis. What that means is that deposits had built up in his heart’s main exit valve, stiffening it so it could no longer work normally, and narrowing it so blood could not flow through as it should to the rest of his body.

Richard’s doctor referred him to Dr. Timothy Byrne, an Abrazo Arizona Heart Hospital interventional cardiologist, who told him about a relatively new and much less invasive way to get a new heart valve. The procedure is called Transcatheter Aortic Valve Replacement, or TAVR.

Dr. Byrne asked Richard to meet with two TAVR team physicians on the hospital’s TAVR team to confirm that he was a good candidate for the procedure.

Richard said the procedure was simple. Dr. Byrne inserted a catheter carrying the new valve through a tiny puncture in his groin, and using special imaging equipment, guided and positioned the valve into place.

“I was up and walking right away and I was only in the hospital for a day and a half. It was incredible. I had zero pain,’’ Richard said.

Richard said he is pleased that TAVR was an option for him because it meant he could return back to his busy life quickly. A mechanical engineer and inventor, he works full time managing two businesses involving low-speed wind turbines he designed and enhanced reading programs that he developed.

About a month after his TAVR procedure, Richard had a follow-up visit with Tammy Querrey, a nurse practitioner who was with him before, during and after his procedure.

Since then, Abrazo Arizona Heart Hospital nurse navigator Sarah Wilmowski has called periodically to check on him.

“It is because of patients like Richard that I love my job so much because he was eager to learn about his procedure, willing to follow post-op instructions and even do cardiac rehab,” Sarah said.

Richard agrees. “There is no doubt that the TAVR is marvelous,” he said.