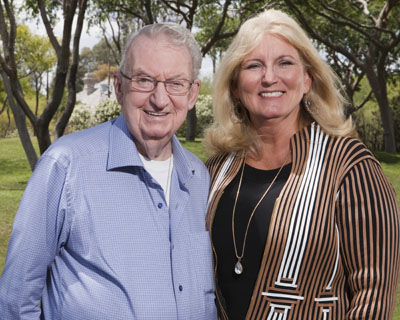 Dries Bosch has never shied away from a hard day’s work. Decade after decade, his focus has remained on getting the job done.

“I’ve been busy all my life,’’ the 92-year-old says. Over the years, he’s owned car dealerships, worked in finance and invented a cleaning product which he continues to sell. A great day is spent dealing with people, helping them get what they need. He likens his can-do attitude to his Midwest roots.

It was that same can-do spirit that Dries held on to when doctors at the Abrazo Arrowhead Campus told him he had a blockage in a vein in his heart. His aortic valve needed to be replaced.

After reviewing his options, doctors told the Scottsdale resident about an alternative procedure instead of having open-heart surgery.

By making a small incision near the femoral artery in the groin, the surgeon implants a replacement value into a patient's heart through a thin flexible tube (catheter) that holds the replacement valve. The team uses special imaging equipment to guide and position the valve into place.

With the TAVR procedure, patients may have fewer complications compared with traditional surgery. There’s also the chance for less blood loss and for a faster recovery.

Dries says it was the perfect choice for him. “I was overwhelmed with the benefits of the surgery,’’ he says of the procedure he had in March 2016. “With the new heart valve, I was feeling so good after TAVR. It’s amazing what medicine can do after going through all that.”

He was also thankful to have a nurse navigator, Tammy Querrey, help him and his family understand the procedure. Tammy is a nurse practitioner and director of the hospital’s six cardiovascular Centers of Excellence.

“Tammy brought so much confidence to me before the surgery and after,” Dries says.

Dries is thankful to the surgeons on the Abrazo Arrowhead Campus TAVR team – Dr. Michael Caskey, Dr. Nishant Gupta and Dr. Merick Kirshner. “They have all made my life a continued success,’’ he says.

Dries advises people to be alert to changes in their health. He had been just living his life handling bookkeeping tasks for his daughter, Pam Griffin, who owns a court reporting business. Suddenly one day, he lost his breath. “I couldn’t walk five feet,’’ he remembers. His daughter took him to the hospital. For Dries, it was simple: let the doctors get to work.

Dries had already overcome one major health hurdle when he was 80. Lung cancer. “It was in the left lung,’’ he says. Even after losing one-third of his lung, he kept working. He was able to recover and knew after the TAVR procedure he’d be able to recover again. Dries says the surgery allowed him to continue being part of the family to his six children, 13 grandchildren and 4 great grandchildren. His daughter, Pam, knows what gets her father through. He calls it his “P.A. theory.” Pam chuckles. “That stands for prayer and attitude. He believes in that.” No matter what comes his way, Dries is ready to get to work.

Disclaimer: Dr. Michael Caskey, Dr. Nishant Gupta and Dr. Merick Kirshner are independent physicians and are not employees, agents or representatives of Abrazo Community Health Network. They are solely responsible for the provision of medical services to their patients.