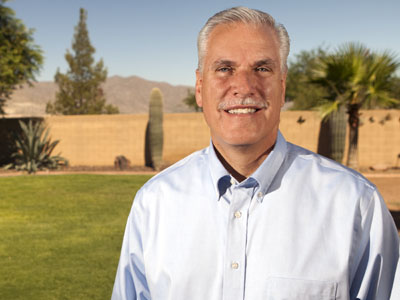 Don Ayers was the picture of wellness with a healthy weight and diet, normal blood pressure and cholesterol, and an active lifestyle that included scuba diving in two oceans and the Caribbean.

But on the evening before Thanksgiving 2016, he was stunned when pain shot down his left arm and across his shoulder blades. His chest hurt and he felt awful, all classic heart attack symptoms.

When his wife Terez said he needed to go to the hospital, he resisted. He’d always thought these things happened to others, not to him. “I’d be embarrassed to find it was nothing,” he said.

Terez insisted, gave him baby aspirin and drove him to Abrazo Community Health Network’s Abrazo West Campus in Goodyear. There, he was rushed into triage.

“I was amazed I was taken care of so fast,” said the 56-year-old grandfather said.  “They did cardiac enzyme level tests and EKGs. The results showed a problem, but they said they had caught me before I had a heart attack.

”Don was whisked to the hospital’s cardiac catheterization lab, where an angiogram found blockage in four major coronary arteries and they put him on a temporary balloon pump. They showed him video of his blockages and said he’d need emergency quadruple bypass surgery.

That’s when things got crazy, Don said.  “There were so many people in the room doing all kinds of things, rushing to get me prepared for surgery as quickly as possible. They were rapidly explaining everything.

”But Don was in a daze. “It was a big shock. I’d always been so healthy and now I was afraid that with or without surgery I might die. I thought about my wife; I wondered if she knew what was happening and if she was all right, or if I would see her again. I was terrified. I was trying to hide it but a nurse named Sarah saw right through me.

”ICU nurse Sarah Gonzalez, RN, knows how easy it is to be stressed, overwhelmed and distressed. And she knows none of these helps patients have good outcomes.

“She just stopped,” Don said. “She stopped talking about what they were going to do, and instead took my hand and quietly said ‘Let’s talk about how you are feeling.’ She was so empathetic. She assured me she’d be with me through my surgery and would watch over me.

“She was my first angel that evening,” Don said. “I felt more at peace. I didn’t feel so terrified.”

Don’s sense of security got stronger when he met his thoracic cardiovascular surgeon Andrew Goldstein.

“I cannot say enough about the doctor’s professionalism and kindness,” Don said.  “I did not feel like just another patient,” Don continued. “I felt as if I were in a medical relationship where he truly cared about my recovery. My wife and I will be forever grateful.

”But that was only the first half of Don’s story. “People who haven’t been through heart surgery don’t understand how it affects you, not just physically, but mentally, emotionally and spiritually,” he said. “I struggled with depression. I didn’t think I’d ever be normal again.

“The surgeon saved my life and the angels in Cardiac Rehab gave my life back to me,” said Don, a Litchfield Park resident.

Amber Newbern said helping Don and the other patients has been a blessing.

“We’re so lucky that they let us into their lives. We get to know them personally, and we’ll check on them if they miss a few sessions. Our goal is to heal their souls as well as their hearts. Sometimes we feel like we get more out of Cardiac Rehab than they do,” she said.

Don, who graduated from cardiac rehab in August, is happy to be back working full-time as a general manager of a Glendale business and looks forward to scuba diving again.

“I owe a great debt to the entire team at Abrazo West Campus. They never gave up on me. Without them I would not be where I am today.”

Disclaimer: Dr. Andrew Goldstein is an independent physician and is not an employee, agent or representative of Abrazo West Campus. He is solely responsible for the provision of medical services to his patients.