Skydiver back in the air after AFib treatment

PHOENIX – Jeff Provenzano jumps out of perfectly good airplanes for a living. He teaches athletes, members of the military and others to do the same. Not much rattles him. So, when his heart starting pounding, feeling off-rhythm, he knew something was wrong. Kind of. 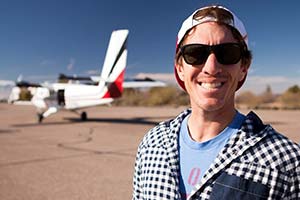 The then 41-year-old skydiver didn’t know what to think right away. He had been training a group of military personnel that were all sick with severe head colds when, a few days later, he felt the same congestion and headache. He was also unsteady and feeling on edge, his heart palpitating.

“I kept thinking the steroids the doctor put me on for the head cold were making me edgy and shaky. I finished the dosage but still felt shaky, tired and like my heart wasn’t beating regularly.” He blamed it on the medications his body wasn’t used to. But then it didn’t go away.

Two months later, the avid yogi and runner couldn’t make it through a class or run more than the length of a football field. Now, he was scared.

Provenzano visited a doctor who diagnosed him with atrial fibrillation and recommended a surgeon at Abrazo Arizona Heart Hospital in Phoenix. Atrial fibrillation (also called AFib or AF) is a quivering or irregular heartbeat (arrhythmia) that can lead to blood clots, stroke, heart failure and other heart-related complications. At least 2.7 million Americans are living with AFib. About 15–20 percent of people who have strokes have AFib, according to the American Heart Association.

“Looking back, my AFib had probably been building over time and I kept brushing it off. I can see how people can go for years without knowing that they have a heart condition like this. I can see how it’s fatal too because you don’t know if you’re in AFib – it slips through the cracks – especially if you’re not active and have a frame of reference for how you normally feel.” 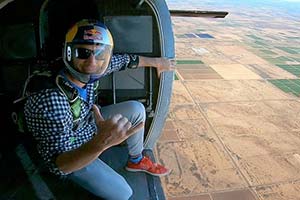 After doing some research, he quickly realized Dr. Akash Makkar was known for his advanced expertise. “What really sealed it was when he understood my situation. He knew I needed to get back to life as soon as possible. I’m a professional athlete with sponsors who rely on me. I can’t sit around and wait for surgery. He immediately worked me into his schedule, moving some things around.”

Not only did Dr. Makkar improve Provenzano’s condition, he did it without exposing him or the medical team to any radiation through a procedure called cardiac ablation without fluoroscopy.

Cardiac ablation is a procedure used to scar or destroy tissue in the patient’s heart that causes abnormal heart rhythm. The procedure is performed using a technology that emits high-frequency sound waves, known as intracardiac echocardiography (ICE), to create a complete and precise image of the heart. These images are combined with computerized three-dimensional mapping systems and pre-procedural cardiac imaging to guide advanced cardiovascular procedures.

Add to that, Dr. Makkar was deeply involved in his patient’s healing – not just the surgical outcome. He visited Provenzano daily, and at every follow-up visit. Jeff’s chest was sore after the procedure, like he had done a hard chest workout for about three days.

After recovering from his surgery, Provenzano was back to his usual, daredevil activities.

“It was such a great feeling to start using my body again – lightly of course, at first. I was ready to get back to life. I don’t handle sedentary life well. The hardest part of the journey was the mental side of the recovery, not the physical.”