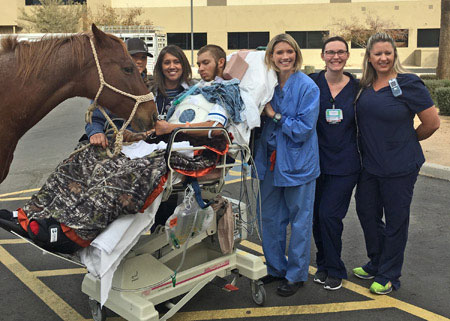 Chance Britain, a Casa Grande resident, suffered head trauma and other serious injuries when he was ejected from his truck as it rolled over on Interstate 8 near Gila Bend on Dec. 3. He was airlifted to the Abrazo West Campus Level 1 Trauma Center and has been cared for in the Goodyear hospital’s ICU since.

In addition to brain injuries, he had fractured an eye socket, pelvis, ribs, back and ankle. He’s had surgeries to repair his pelvis and back. He has a trach to help him breathe so he’s unable to speak. As he became more aware of his surroundings, Chance’s facial expressions showed his frustration about being bedridden.  Because of his pelvic injury, he can’t bear weight for three months.

Before the accident, the high school senior led a very active life. Since age 3, he has participated in rodeos. He loves ranching, hauling cattle, goats, horses and farming. He was making college arrangements to pursue a ranching career.

Because Chance loves being outdoors, his Abrazo West Campus ICU nurses, parents and sister have been taking him outside in a “Cadillac Chair” to get fresh air to give him hope and help him heal.

Chance would smile when we went outside and his face showed his frustration when we went back inside,’’ said Chance’s favorite nurse, Yolanda Stults.

During one of his outdoor excursions, Chance was elated to see Roany waiting for him. His face lit up as he stroked her mane. Chance has been riding Roany in rodeos around the nation for nine years, winning several roping championships.

His parents arranged for Roany to be transported from Casa Grande to Abrazo West Campus. But the reunion between Chance and his horse couldn’t have happened without help from Stults and other Abrazo West Campus ICU nurses who take care of Chance.

“The nurses at Abrazo West Campus have gone above and beyond for helping us reunite Chance with Roany. They have hearts of gold,’’ said Jo Britain, Chance’s mom.

Roany sensed that there was something different with Chance.

“Roany seemed to know that Chance was hurt. She was very gentle with him. It was cool to watch,’’ Chance’s sister, Cheyenne Britain said.

“He shook Yolanda’s hand, sips from a straw and puts on his baseball cap. He was able to write part of his name. Our goal is for his trach to come out so he can speak,’’ Mike said.

“The nurses and doctors are amazing people. They are very personable and professional,’’ he said.

“We’re taking care of patients as if they were our own family. It’s important to get close to patient’s family and friends because they are important to the patient’s recovery,’’ Lawlor said.

Chance will be moving to a rehabilitation hospital soon and his parents are hopeful that he will be able to ride Roany again someday. 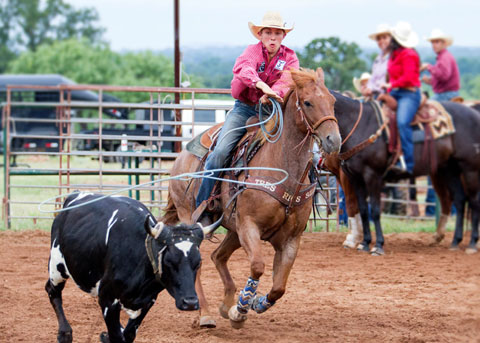