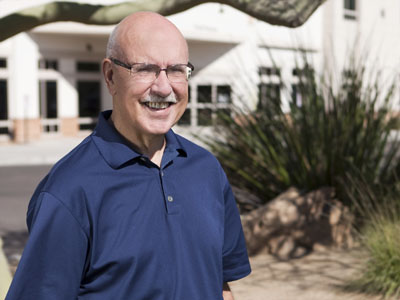 What started as a typically uneventful evening in January, turned into a life-changing experience for Steven and Mary Petersen. One moment Steven was peacefully watching television with his wife and the next moment he was speechless and paralyzed on his right side.

If not for the medical expertise provided by two Abrazo Community Health Network hospitals, Steven and Mary said he may have remained that way for the rest of his life.

“You sometimes can get a miracle,” said Mary Petersen, reflecting on the fateful evening.

The Goodyear couple had been sitting on the couch when Steven reached for a drink on the table. Mary immediately sensed that something was wrong.

Steven heard everything, but could not say a word.

Mary, a retired pediatric nurse, realized her husband may be having a stroke.  She quickly called 911. The Goodyear Fire Department arrived less than 5 minutes later. Steven was rushed to the Abrazo West Campus.

In the Emergency Room, Steven was given a CT scan which revealed a stroke or a completely blocked artery.  He was given tPA (a clot-busting drug) after being screened and qualifying for this treatment. He was then transferred by helicopter to the Abrazo Central Campus, a neurosciences specialty hospital. There, Dr. Ahmed El-Gengaihy, a board-certified neurologist, performed a thrombectomy, the surgical removal of a blood clot from the middle cerebral artery.

Soon after having the blood clot removed,  Mary was happy that her husband of 46 years not only recognized and greeted her, but he no longer was paralyzed.

“I remember everything that happened,” said Steven, a retired business executive. “I remember the helicopter ride. I was wide awake during the procedure when Dr. El-Gengaihy removed the clot. It was like an out-of-body experience.”

The stroke was surprising.  Steven, 68, was in good health. He walked and worked out regularly.  He had no family history of strokes, did not smoke, and had no chronic medical conditions. He didn’t even take any medicine on an ongoing basis. But his experience underscores the fact that a stroke can strike anyone.

When Steven was discharged three days later, Abrazo Central Campus created a personalized recovery plan for him. It included physical and occupational therapy and help with post-stroke problems including low blood pressure and fine motor skills. In three weeks, he was enjoying his daily walks again.

Mary was grateful that she knew the symptoms of a stroke and did not panic when those symptoms presented themselves. But it was the advanced medical care and state-of-the-art technology at the Abrazo Community Health Network that she credits with saving her husband’s life.  The rapid response time of the primary stroke team and the individualized care provided helped prevent brain damage.

“It was the perfect storm of everything going right the night of January 15-16 with quick recognition, action, and incredible medical interventions,” Mary said.

Disclaimer: Dr. Ahmed El-Gengaihy is an independent physician and an employee, agent or representative of Abrazo Community Health Network’s Abrazo Central Campus. He is  solely responsible for the provision of his medical services to his patients. For more health information, go to AbrazoHealth.com.