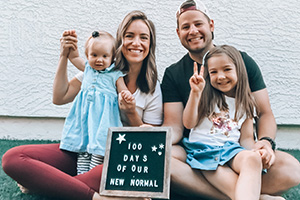 The morning of January 8, 2020 started off like any other day for Stephanie Flynn. Little did she know, she would have a life-changing stroke just minutes after her husband left the house to take their eldest daughter to school.

“I was at home with our youngest daughter who was 10 months old at the time. When suddenly, my right side began to feel numb, my face started to tingle and I felt the need to lay down on the ground,” said Stephanie. “This is when I knew something was wrong.”

After about 10 minutes, Stephanie’s husband returned home to find her laying in the middle of the living room. After describing how she felt, he immediately recommended they go to the hospital.

“Luckily, Abrazo West was the closest hospital to our house at about a 10-minute drive away,” said Stephanie. “My condition began to dramatically deteriorate in just that short drive to the hospital. My speech became completely slurred, and I had lost almost all feeling on the right side of my body. By the time we arrived at the hospital, I was not able to walk without assistance. My husband ran into the ER and for help to get me into the building.”

Understanding the need to work quickly to care for Stephanie, the team at Abrazo West took her back to a room and asked questions regarding her health, symptoms and current medications.

Abrazo West nurse Amanda, RN, introduced herself to Stephanie’s husband as the liaison between Stephanie and the medical team, offering the couple comfort and support throughout their hospital stay.

“Amanda stayed by my side from then until surgery, multiple follow-ups and even after I left the hospital, explaining in layman’s terms what was being done and what to expect,” said Stephanie. “I was also in the care of Tracy, NP, who, much like Amanda, kept me informed on what to expect.”

Within minutes of being at the hospital, Stephanie was getting a CT scan to find the cause of her symptoms. Sushant P. Kale, MD, MPH, FAHA, a neurologist at Abrazo, diagnosed her with an Ischemic stroke, caused by a cervical artery dissection.

Dr. Kale and his team gave her a tissue plasminogen activator (tPA) dosage within an hour of her first stroke symptoms. She was then prepped and sent to begin a thrombectomy to manually clear the clot that had formed in her brain, which was causing the stroke. When Dr. Kale started thrombectomy procedure, he noticed the clot begin to clear on its own due to the tPA dosage so he didn’t move forward with the procedure.

“Within two hours of first arriving at the hospital, I was recovering in the ICU,” said Stephanie. “I was able to speak normally, and I was already beginning to regain feeling on my right side.”

She spent three days in the ICU while Dr. Kale and Amanda kept her informed of her progress and what to expect going forward. Soon after, she began physical therapy to regain the strength she lost on her right side, and she had multiple follow-ups with Dr. Kale to monitor her progress. Within six months, she was able to regain her full physical strength close to full mental stamina within a year of the stroke.

“I consider myself very lucky in that my outcome is almost back to normal physically and mentally,” said Stephanie. “This is a direct reflection on the timely care I received from Dr. Kale and his team at Abrazo West.”

Stephanie hopes her experience emphasizes the importance of acting F.A.S.T. (Face drooping; Arm Weakness; Speech difficulty; Time to call 911) during a stroke. If you or a loved one is having a stroke, call 911 immediately.