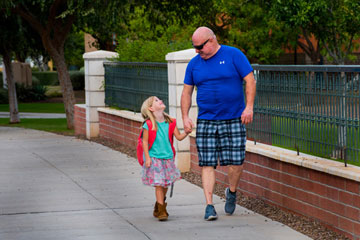 It was just a typical day, out for a typical run with his dog. But Mike Collier’s life took a sudden turn.

When Victoria got there, Mike was on the ground, his dog beside him. At home, she tried to rub his leg. He tried a warm bath. When nothing worked, she called the doctor.

With his leg turning blue, they headed to the emergency room. After an ultrasound, came the news, Mike recalls. “(I was told) this is life threatening. I couldn’t drive. I had to be sent by helicopter to the heart hospital.”

A massive blood clot was putting his life at risk.

Mike was flown from the Prescott area to the Abrazo Arizona Heart Hospital in Phoenix where he was met by Dr. Venkatesh Ramaiah, a vascular surgeon.

“They asked if I smoke or drank or had a history of clots and I’m ‘no, no and no,’ “ Mike says, recalling the intensity of the day.

It turned out that the blood clot was so massive it stretched from his ankle to his groin.

Mike had a stent put into the calf. He had more tests. When they put a scope into his heart, they found what should not have been there: a hole. This is what caused the blood clot in his leg.

The gap was closed with a PFO (a patent foramen ovale closure device) repair. Mike was in the hospital for four days.

This was Mike’s second brush with death. Two years before, he had a heart attack at the age of 48. After the blood clot, Victoria and Mike moved to Surprise to be closer to medical facilities.

Over the past six years, Mike’s had annual checkups with Dr. Ramaiah. “I couldn’t have asked for a better team,’’ Mike says. “I feel great now. I can’t say enough how much it means to me to have people of this caliber of professionalism and this type of caring taking care of me.”

Mike has a lot to live for, says his wife of 32 years. “Twice, Mike should have died,’’ she said. “The first time with the heart attack and the second time the blood clot could have traveled to the brain.”

But he got the chance to be around for Victoria, their daughter, two sons and five grandchildren.

Mike is back walking. This time, alongside his 6-year-old granddaughter to school and back every day.

Now, 56, Mike says life is grand. “Everything fell into place so perfectly. I couldn’t have been in better health for my grandkids and my family.  I can walk, swim and bike.”

He’s got a message for others. “Don’t be stubborn. Listen to your body and listen to your doctors. If you don’t feel good, then get it checked out.  If you’re stubborn, you’re putting your life in your own hands. I want every guy out there to listen to what people are telling you.” 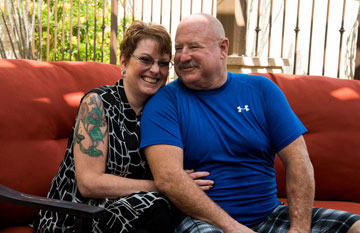