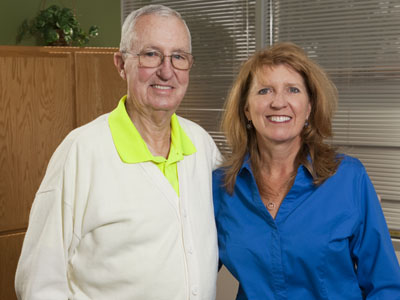 An avid hiker and golfer, John McPhilimy was living a healthy lifestyle and enjoying retirement at his summer home in Utah when the unimaginable hit.

“I just finished a four-mile hike and then took a nap,” John recalled. “I was eating lunch and a friend, who is a nurse, noticed I had a droop on the left side of my face.”

A trip to the emergency room confirmed that John had suffered a stroke, affecting his speech, ability to swallow, memory, and more. Back in Arizona, John – who was accustomed to hiking 300-400 miles a year – committed to a wide-ranging therapy regime at Abrazo Scottsdale Campus.

Today, the Scottsdale resident is celebrating his recovery.

“My progress is like night and day,” John said.

These are the kinds of results patients see and feel every day at Abrazo Scottsdale Campus through comprehensive rehabilitation services.

The hospital’s 14,000-square-foot rehabilitation center is a state-of-the-art facility equipped with the latest tools for treatment and a host of specialized therapies. With treatment plans tailored to each patient, the program combines hands-on manual therapy and complete functional therapeutic exercise to help patients achieve the highest level of functioning.

For John, the treatment plan included multiple approaches to address multiple issues.  He was slurring his words and having difficulty swallowing, which caused him to drool. He struggled with his entire left side, from his ability to grasp things with his hand to a problem running into things. “I wasn’t aware of my left side,” he said.

John also battled memory and attention issues, as well as a facial droop.

A retired executive in the high tech industry, John set an ambitious and achievable goal for himself: to recover as much as possible in those areas, remain independent by driving again, and enjoy more time golfing.

Immediately following the stroke in July 2016, he remained in Utah with his wife JoAnne and began speech therapy.

Soon after, he began a therapy regime at Abrazo Scottsdale Campus that included speech, occupational and physical therapies as well as referrals to work with adaptive golf and adaptive driving specialists. Each helped address a specific problem, whether boosting fine motor skills to allow him to more easily pick up items or working to improve coordination and get his golf swing back.

For instance, using electrodes to strengthen facial muscles helped make his face look more symmetrical and decreased his drooling.  Electrodes placed on muscles of his neck were used to rehabilitate the muscles used for swallowing, which decreased his risk of pneumonia caused by beverages going into the lungs.

In addition to the outpatient therapies, John focused on exercises at home using a home program provided by his therapists at Abrazo Scottsdale.

John also changed his diet, opting for a Paleo plan full of meats, fruits and vegetables along with more organic choices. He also adopted a new mantra to keep moving, be flexible, and accept that he may need to do things a bit differently now.

“He didn’t give up,” she said. “In the end, he’s made recovery in almost every area.”

After completing stroke therapy, John decided to go the extra mile. He is paying out of pocket to take part in the Wellness Program at Abrazo Scottsdale Campus, and is also doing cardio rehabilitation exercises.

John is back to enjoying life with his wife and large family, including five children, 11 grandchildren, 12 great-grandchildren and four great, great grandchildren. He is also driving and out on the links.

The results are easy to see and feel, John said.  “I had the best golf game the other day!”