Am I going to die?

That’s the question Edward Cerninka kept asking himself when doctors told him he had a golf ball-sized tumor in his brain.

“I thought, ‘Even if I survive brain surgery, what if I can’t speak or walk anymore?” Ed says.

Ed had first noticed something was wrong while driving down Interstate 10.

“I felt like I was driving 20 miles an hour, but I looked at my speedometer and I was going 60,” he remembers. “I was unable to speak or text, but it went away shortly after I pulled off the freeway.”

Ed sought treatment, and the doctor offered traditional brain surgery as the best option, but said it was risky.

“I had never had surgery before — I had always been so healthy. My wife and I asked the neurologist about the risks, but by the time I went home, I thought I’d take my chances and live with the tumor.”

Luckily, after the initial diagnosis, Ed’s friends urged him to get a second opinion. That’s how he ended up at Abrazo Central Campus.

“I met with neurosurgeon Marco Marsella, and I felt totally connected to him as soon as I met him,” Ed says. “He’s a professional, kind and amazing man, and I could tell he cared about me as a human being.” 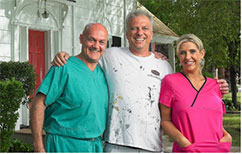 Dr. Marsella told Ed about Abrazo Central Campus’s surgical tool, BrainPath, which provides patients with a less invasive type of brain surgery. Ed felt confident that giving it a try was the right thing to do.

“I turned 50-years-old that week, and two days later, I was having brain surgery,” he says.

Less than 24 hours after his surgery, Ed was chatting and joking with his wife and parents.

“It was a miracle surgery,” Ed says. “I still can’t believe that a tumor the size of a golf ball was in my head! And that I was well enough to go home just two days after having my brain tumor removed.”

Forty eight hours after brain surgery I was on my way home. I was walking, talking… This whole experience has been such a miracle.
Today Ed is back at work, painting houses in the Phoenix historic district. He wants to share his story with others because he doesn't want anyone to feel as hopeless as he did before he came to Abrazo Central Campus.

“I am so glad I got that second opinion,” he says. “I was so impressed with all of my care at Abrazo Central Campus — Everyone has done such an amazing job. They were so caring to my wife, my parents and me. This whole experience has been such a miracle.”